The TRAIT project is slowly coming to an end.

The Intellectual Outcome II, the heart of the project, is almost ready in the multilingual version. The partners created an extensive handbook - available as a PDF-document and a PPT-file as well - including training and learning material for all the modules regarding the transversal skills.

Now we are going to make sure that all our dissemination channels are served with our
material:
> the TRAIT Website
> the TRAIT Moodle plattform
> the TRAIT Facebook page

A very busy period occupied all partners in our project.

> The TRAIT compendium grew and grew and is almost finished, ready to be published soon.

> Joint staff tranings were held to train our Trainers

> All partners held courses to test our modules with students

More information will be offered on our project website: http://www.trait-erasmusplus.com/

I. Interpersonal and social communication
II. Learn to learn
III. Civic competencies
IV. Entrepreneurship
V. Cultural awareness and expression
VI. Sustainable development
After elaborating the first three modules by our partner organisations from Italy (Torino), Romania (Iasi) and Turkey (Burdur) they were presented in a six days training event to staff of all TRAIT partners.

Teachers, trainers and students were very satisfied with the great variety of information, lectures and exercises. Now the material has to be translated in all partners languages and uploaded to the projects working platform, Moodle. 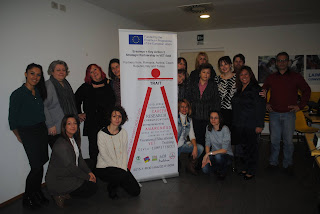 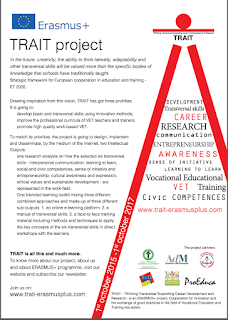 Under this link you can find the TRAIT questionnares used for the research to gain qualified results:
http://www.trait-erasmusplus.com/?pnum=13&pt=O1+the+research

This will be the Intellectual Output Nr. 1 of TRAIT.

The questionnaires are available in all partner's languages as well as in English. The first Version adresses employers and personal managers, the second is realted to  teachers & Trainers.
Eingestellt von Unknown um 08:11 Keine Kommentare:

Setting up our partnership and starting to disseminate information we also use facebook.

So you may join us
www.facebook.com/TRAITproject

Soon we will start our research related to the 6 topics we will work on:
Interpersonal communication
Learning to learn
Social and civic competences
Sense of initiative  and entrepreneurship
Cultural awareness and expression
Ethical values and sustainable development - good governance

The research will be done by questionnaires passed to 50 people by eych partner:
25 employers (any kind of employers, especially small and medium organisations)
25 teachers (preferably VET) or trainers who deal with adolescents, young people who are close to the age of having the right to work

If you want to take part in our research don't hesitate to ask for a questionnaire or newsletter!
Eingestellt von Unknown um 01:46 Keine Kommentare:

In the TRAIT project we are dealing with transversal skills. But what is that exactly?
Here the definition by the Glossary Of Education:

The term 21st century skills refers to a broad set of knowledge, skills, work habits, and character traits that are believed—by educators, school reformers, college professors, employers, and others—to be critically important to success in today’s world, particularly in collegiate programs and contemporary careers and workplaces. Generally speaking, 21st century skills can be applied in all academic subject areas, and in all educational, career, and civic settings throughout a student’s life.

It should be noted that the “21st century skills” concept encompasses a wide-ranging and amorphous body of knowledge and skills that is not easy to define and that has not been officially codified or categorized. While the term is widely used in education, it is not always defined consistently, which can lead to confusion and divergent interpretations. In addition, a number of related terms—including applied skills, cross-curricular skills, cross-disciplinary skills, interdisciplinary skills, transferable skills, transversal skills, noncognitive skills, and soft skills, among others—are also widely used in reference to the general forms of knowledge and skill commonly associated with 21st century skills. While these different terms may not be strictly synonymous, and they may have divergent or specialized meanings in certain technical contexts, these diverse sets of skills are being addressed in this one entry for the purposes of practicality and usefulness.

While the specific skills deemed to be “21st century skills” may be defined, categorized, and determined differently from person to person, place to place, or school to school, the term does reflect a general—if somewhat loose and shifting—consensus. The following list provides a brief illustrative overview of the knowledge, skills, work habits, and character traits commonly associated with 21st century skills: